Two of the allovers waistcoats I made this year were commissions. 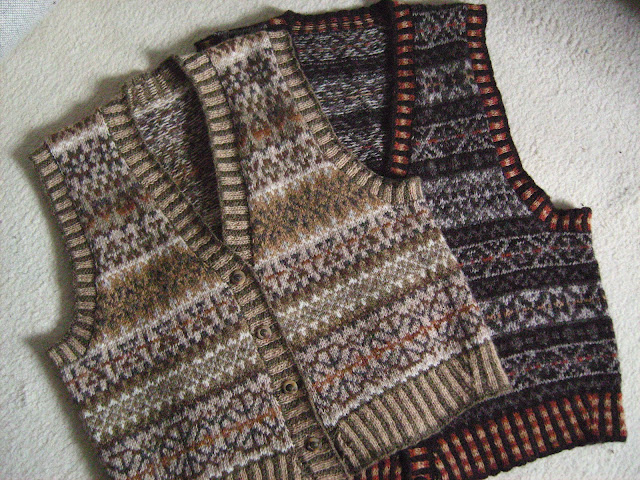 I mostly work from a portfolio of designs, but these can be changed, the motifs can vary and the colours can change. These two allovers are from my current designs but with changes that the customer requested.

The customer wanted changes to the colours used in the Njuggle design. There were 4 onion colours, 2 greens and 2 very soft orange/yellows which she liked and wanted to include in the allover. Then she spotted 4 lichen dyed colours which she liked as well. The lichen colours were 3 shades of rust, 1 rich rust and 2 lighter shades and 1 grey/green.

The dark onion green and light onion yellow were used for the ribs, and the dark green and rich rust used in the motifs. The remaining colours were used for background colours replacing the greys in the original colourway.

The result was a beautiful blend of colours.

The request for a second commission was to change the colourway of the Selkie design from Fawns to Greys and include a madder red and an onion yellow. I used the dyed colours mostly on the ribs but using also them alternatively for the centre row of each pattern.

The result was a very striking garment. In these colours it is now not a 'Selkie' design. This colourway will be renamed and added to my portfolio, but perhaps not with the dyed colours, or with different dyed colours.

I had thought that the changes to the Nuggle colours would be quite easy and changing the Selkie from fawns to greys would be more difficult to do. In fact the Selkie in greys was quite simple and introducing the dyed colours into the Nuggle design, was to begin with, very difficult.

Happily both customers were very pleased with the results.

Coming home after visiting my daughters family was wonderful. Although I missed them all, Shetland looked beautiful, sunshine, vistas, blue seas, the rim of clouds on the horizon every pastel colour there is............and the wild flowers in full bloom were georgeous. 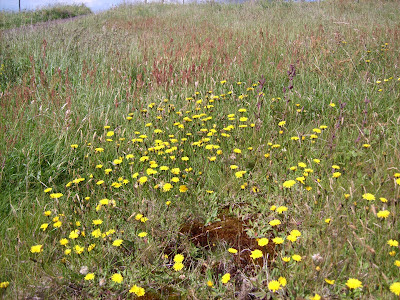 The hawkbit and sorrel were a carpet in this field.

The hawkbits were electric yellow in the sunshine and danced in the wind. 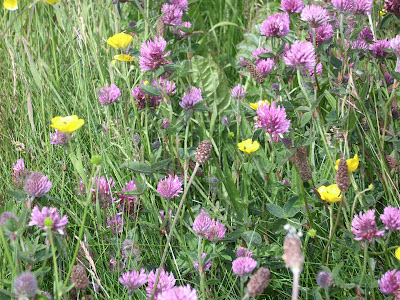 Red clover was everywhere and is always beautiful.

Buttercups, vetch and scabious were growing here with the clover.

My photos could be better, but really you had to be here to see the whole picture.

I then got involved with work and would forget to go take more photos.

So we have had our first winter gales, early this year, but it has reminded me to get on to summer blogging. Ah well, next year.

Posted by Elizabeth at 04:12 No comments:

Elizabeth
Shetland Handspun uses old established spinning and knitting skills to produce yarns and garments from soft handpicked Shetland fleece. Handspun yarns are available in natural colours from white to Shetland black and fawn to moorit as well as a variety of naturally dyed colours. Fine lace yarns can include exotic fibres such as silks and cashmere to enhance the drape of the finished garment. Indulge in a timeless Fair Isle allover or an heirloom Shetland lace shawl. Enjoy luxurious yarns knitted in traditional or contemporary items. Choose from smaller accessories such as mitts, hats, and scarves - or treat yourself to an individually designed garment. Bespoke spinning, knitting and dying tuition is offered from beginner to experienced levels.